Today I awoke at 5.30am to make sure I had time for a relaxing shower before heading to the airport  for my 7.15am flight to Melbourne. I am so looking forward to seeing Rachel and Clare and finally meeting my new little granddaughter Mikayla, although it could be a bit strange not being with Shane after being with him 24/7 for the past 28 days. All was going well sitting at the airport, I even caught up with a friend Kylie whom I worked with at the Tasmanian Travel Centre. Boarding was called and it was not long before I was all tucked up in my seat. Well we sat and sat and sat, with not a sound from anyone as to why we were sitting - please Mr Jetstar pilot - tell us why we are aren't moving!!! Finally a voice came voice the intercom, apparently a man who was supposed to be travelling had some medical condition but his medical papers to travel were not in order. After along while of the appropriate people trying to fix the paperwork problem it was to no avail and the passengers luggage had to be found in the hold and removed. Finally after some more delay there was another announcement that the cabin doors were about to be closed - but I was not confident with our departure until we were actually taxiing down that runway. Finally after about a 45min wait the plane started moving away from the terminal, with a combined round of applause from the passengers. At last we were on our way to Melbourne. So now I sit here 2 hours into my 3 plus hour flight looking down on the barren Australian landscape I have just finished the past month driving along. 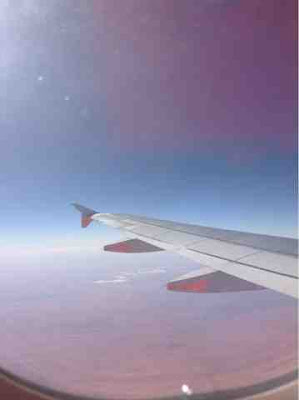