More Selfies for my UTAS course

OK here are a few more selfies, although one of them would probably be classed as a self portrait. I had to give someone (a real non-photographer) directions of what I wanted done. With these selfies I have concentrated more on what I enjoy, to give the audience a bit more of a glimpse into my life.

It's all to common that while we are on holidays overseas, in a different state, anywhere we don't live we do a lot of exploring to experience as much as we can. But when we are home, living our normal day to day life we very rarely explore what our own back yard has to offer. Well seeing I am  now home for a few months I intend to do some exploring in my city Melbourne and as I proved to myself today, see it in new eyes.  Today I decided to head into the city and have a look at Cook's Cottage in the Fitzroy Gardens. After visiting the new visitor information centre to pay my $4.50 entry fee I wandered over to the cottage. Built in 1755, Cook's Cottage is the oldest building in Australia. Cook's Cottage, a gift from philanthropist Sir Russell Grimwade, was bought from Yorkshire to Melbourne to commemorate Victoria's centenary in 1934. In England the cottage was originally owned by the parents of Captain James Cook. Each brick was individually numbered packed into 253 crates and shipped to Australia.

The beautiful cottage gardens are filled with many plants that would have been very common in an English 1700's garden.

After visiting the cottage I decided to have a better look at Fitzroy Gardens. I have driven past these gardens literally hundreds of times, but never explored them and I must say I was very pleasantly surprised. I never dreamed these gardens were so pretty with so much to offer and so much history.
Fitzroy Gardens are named after Sir Charles Augustus Fitz-Roy. Governor of the colony of New South Wales 1845 - 1855. Governor General of Australia Colonies 1850 - 1855. Set aside as a reserve in 1848 the gardens follow a classic Victorian era design.
Fairies' Tree - Sculptured by Ola Cohn between 1931 and 1934, the Fairies' Tree is beloved by generations of children. The carving incliudes Australian animals, birds and bush spirits.

Model Tudor Village - The model village was a gift to the people of Melbourne in 1947 from the citizens of Lambeth, England, in appreciation for food parcels sent during WW11.

Elm Tree Avenues - The beautiful mature English Elms that line the major paths provide a mystical feeling and some lovely shade on a warm day.
The Dolphin Fountain - This fountain was created by sculpture June Arnold in 1982. Featuring a variety of marine creatures it is a very interesting structure.
The Rotunda - Created in 1873, the Rotunda is another example of the sculptural elements popular in 19th century gardens.
River God Fountain - At the northern end of the gardens is Melbourne's oldest surviving public artwork. This fountain was created in 1862 by leading sculpture Charles Summers.
Grey Street Fountain - This is one of the original five fountains installed in the gardens in the 1860's. The three tiers of vases on the rock pedestal is a classic garden ornament of the 19th century.
The Conservatory - With the magnificent 1940 statue of "Diana and the Hounds" the colours of the hydrangea's inside are equally magnificent.

As I mention before these gardens had so much more to offer than I had ever thought and I would recommend anyone in Melbourne CBD, to go for your own exploration of the Fitzroy Gardens.
Posted by Davine at 6:01:00 PM No comments:

I have recently started an online Photography and Social Media Course with UTAS (University of Tasmania). I will be using my "53buddha" blog and my Tumblr  account as my digital journal. In the first couple of weeks we have been asked to consider the following questions.
Which photography themes inspire me? I would have to say Landscape, Travel and People.
Which platform would I prefer to use for my digital journal? As I mentioned above I intend to use my blog and tumblr.
We also have to participate in the online discussions (which can take up a lot of time), and check out some photographers that inspire us. To get some inspiration I have joined a couple of Facebook photography groups eg. Aussie Landscape photographers and Australian Geographic.
I have also decided to challenge myself and ONLY use my iPhone for all my photos, leaving my Canon DSLR tucked up in her bag.

In preparation for Project 1 we are to take some test "selfie"shots. Not being a fan of the selfie I try to play with the shots so much that I am hardly recognisable! The top shot is my first attempt using a multiple exposure then the second i just played with lots of colour. I would love any comments on my progress.
#smputas

Saturday night at The Meadows

You may ask where and what The Meadows is? Well The Meadows is one of the two greyhound racing tracks in Melbourne and is situated about 26 km (26 mins) from Melbourne CBD. It's also where four girlfriends and I had our Christmas night out last Saturday night. I'm not much of a gambler but this is a pretty entertaining night which includes entry to the venue, and a buffet dinner, which was quite nice. We were lucky our table was situated right at the windows and looking straight at the finish line. I really like greyhounds and would like to adopt one but it's a bit pointless while we are still in our travelling mode. I have been friends with Alice, Melissa, Robyn and Wanda for around 15 years and cherish their friendship, and we always have a lot of fun when we venture out. I did have a win and a couple of placegetters so I came out about even.

Seeing we have finishing our travels for a little while and staying home for Christmas I have decided to do a bit of exploring in my own city, Melbourne. So I will be doing some posts on what beautiful attractions Melbourne has to offer. 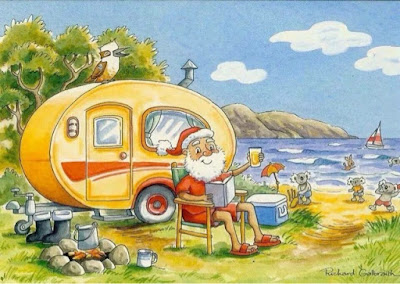 I'd love to wish all my readers a very merry Christmas and the happiest New Year.
I have also just started an online Photography and Social Media course with UTAS (University of Tasmania) and we have to keep a journal on our progress. So I have decided to do my online journal on 53 Buddhas and also on a Tumblr site I am in the progress of setting up.
Posted by Davine at 7:00:00 PM No comments:

Lakes Entrance is a tourist town and also a fishing port in East Gippland in Victoria. This is once again a town that's population increases dramatically during the holiday season. The normal population is around 4600. I have been to Lakes many times over the last 40 years but this is the first time we have been her in our van "Myrtle". Lakes Entrance is about 320 kms from home so we should be home tomorrow afternoon sometime. So that brings our Aussie Adventure 2 to an end. I will certainly miss travelling but it will be nice to be home for Christmas.

Along the Esplanade are several of these wooden life size sculptures created by the chainsaw artist John Brady. Originally these trees were memorial Monterey Cypress trees, planted in 1924 to honour the districts servicemen who fell in World War 1. Twenty-six trees were originally planted for each serviceman whose name is commemorated on the memorial stone near the wounded soldiers sculpture. 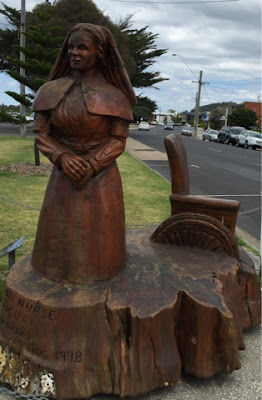 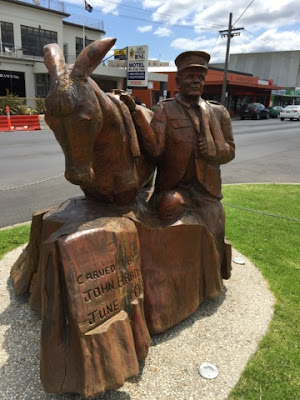 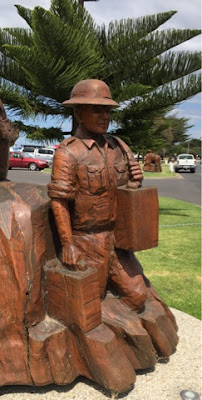 With our Aussie Adventure 2 almost at an end we are now back in Victoria - our home state. We are having the next few days at the small fishing village of Mallacoota. With a permanent population of around 900 it is quite a peaceful place to stay, but during the holiday season it would be a much busier place with a holiday population of over 8000. We are staying on the foreshore and as I stepped outside of Myrtle this morning I was greeted by a lovely river view.

This morning we drove out of town to have a look at the WW11 Operations Bunker Museum. The Bunker was a major Advanced Operations Base used by the RAAF during WW11. The Mallacoota bunker was never actually used as an air raid shelter, but was used as the headquarters of RAAF coastal intelligence activity in the region.
Later in the afternoon we headed down to the wharf for some fishing. There were some small fish but it was pretty quiet, so I pulled out my camera and took some shots of the early evening view I was enjoying.

Tomorrow ends my week with my amazing son Shane, my lovely daughter in law Stacey and my two adorable  grandchildren O'Shea (4) and Finn (2 this month). Because we live around 800kms from each other we don't get to catch up all that often, but when we do it certainly makes my heart smile. The week started with the ritual of putting up the Christmas Tree with O'Shea having the honour of placing the star on top.

The rest of the week consisted of lots of fun, lots of mango eating and lots of Granny Dave (me) spoiling her boys.
Then today on this beautiful sunny Sunday, the two Shane's, O'Shea and I went out fishing in Shane's (son) boat. Unfortunately O'Shea got sea-sick, so we decided to head to the beach, where Stacey and Finn joined us for a bit of a fish and a play. Almost everyone caught some fish (we didn't keep them) but the best thing for the day O'Shea caught is first and second fish ever! He was so excited, almost as excited as his daddy was.

We are currently at a place called Windang which is a suburb of Woolongong. It's not that this is a happening place to stay, although it is quite pretty as its situated on Lake Illawarra. But my reason for wanting to stay here was because its only 15 minutes from the Nan Tien Temple. A number of years ago while driving back to Melbourne from Queensland I saw this magnificent building off in the distance. From that day I have been telling myself I will get here to visit one day. Unfortunately I couldn't do the tour as this is the one Saturday they weren't conducting it, but I was still able to spend time there and soak up the beauty and peace this magnificent temple exudes. Nan Tien Temple is one of the branch temples of Fo Guang Shan, founded in 1965 by Venerable Master Hsing Yun. "Nan Tien" in Chinese, literally means "Paradise of the South" and is the biggest Buddhist temple in the Southern Hemisphere.

We are now having a couple of lazy days in a suburb called Toowoon Bay, situated between Sydney and Newcastle. Once again we had to stock on a few grocery items so headed to the shopping centre down the road. After lunch we wondered into a Christmas Pop Up shop. I looooove Christmas, I love decorating my house inside and out so this shop was a little bit of heaven. It wasn't a very big shop and it was absolutely jam packed with Chrissy stuff. I have never been in any sort of shop so full of stuff. I may have to go back tomorrow as the amount of stock overwhelmed me a bit and I didn't buy anything. 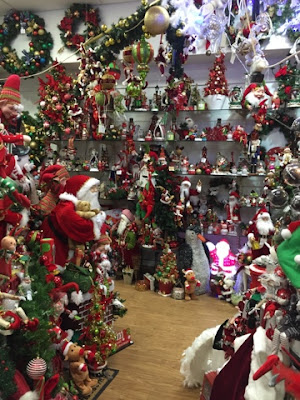 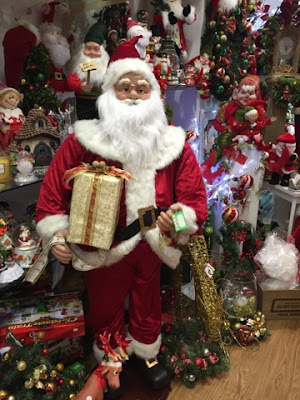 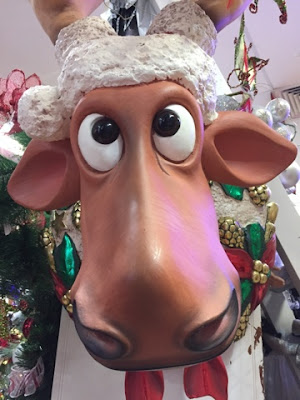 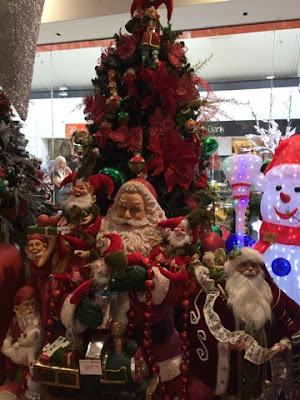