This week I got back into taking myself out on a Tuesday Adventure Day. This time I thought I would seek out some of the outdoor art the in shire I live in. I have lived in the Nillumbik Shire for quite a long time and have seen some of the art on numerous occasions, but I have never made a conscious effort to find out the artists or the meaning behind the piece. Nillumbik Shire covers quite a large area soI started in Eltham and ventured out.
Wall of the Moon is  a ceramic mural made of earthenware tiles.It consists of a playful organic abstract design similar in style to the Spanish artist Joan Miro. Shades of yellow and black glazes are layered onto matte black and shiny bronze tiles.


Surveyor of Suburban Environs is a polished stainless steel sculpture comprising an eye reminiscent of ancient egyptian hieroglyphics, which is held up with a tappered and jaggered tail like pedestal.

Is this art? I think it is. Eltham's Timber rail bridge was built in 1902 and is the only railway bridge of predominantly timber construction that is still in regular use as an integral part of Melbourne's metropolitan electric railway network and one of extremely few timber railway bridges in the state that still carries trains.
A realistic depiction (almost lifesize) of the author of almost fifteen books, Alan Marshall cast in bronze with green patination. Dressed in a jumper and slacks, Marshall is shown perched on a crutch, holding a book to his heart, gesturing to his audience to come and listen to his words. Alan Marshall lived in Eltham most of his life and was a central figure in the area's community of writers, artists, sculptors, film makers,actors and musicians.


Wayfarer is an excellent example of Deborah Halpern's tile construction technique and playful style that she is renowned for. I have always loved Deborah Halpern's work and am delighted when I come across yet another piece either in  the city or in other Melbourne locations.

This piece Transaction by artist Robert Baines is a large cascading form in stainless steel. Multiple rows of concave dishes set on long steel stems which progressively increase in size as they rise in height.
The Kumar sister designed this sixty metre gently curving bench, Benchmark, in response to the topography of the site, Coventry Oval. The sculpture is designed to describe the boundary between the formal oval and the natural creek bank.

The Breeze is an abstract work made out of welded steel and painted in enamel in bush fire red. It comprises of flat, cut out shapes, interlocking at different angles, giving the impression of being hinged together rather than fixed. The circular cut-out in the eye mimics the sun, symbolising the intense heat in the Australian climate,while the colour red alludes to the history of bushfire within the urban and rural fringe.


The Kangaroo Ground War Memorial Tower is built on the highest hill in the district. It was unveiled on November 11, 1926 and is used as a fire spotter in the summer. It offers 360 degree views which take in Melbourne, the north-east suburbs and the Dandenong and Kinglake Ranges.

Surrounding the tower there are seven windmill palms which represent the seven States and one Territory of Australia. The oldest of these palms are over 60 years old. 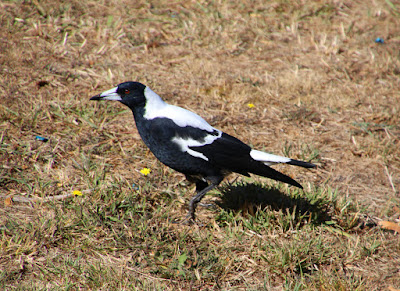 While sitting enjoying the amazing vies the silence was only broken by the beautiful catter from the magpies.


Lasting Memories Mosaic Seat is a large concrete seat in the style of an organic chaise lounge. The Lasting Memories Mosaic Group began this piece just after the Black Saturday bushfires on February 7, 2009. After the horrific fires ravaged through St Andrews and the surrounding areas, a group of bushfire affected ladies bravely came back to St Andrews to begin their healing in an artistic way.

Each woman created something beautiful and meaningful, using remnants of crockery, glass, tiles and bricks salvaged from their own properties. This artwork identifies who they are and tells their personal "life journey"and family heritage and memories of what they had experienced before, during and beyond Black Saturday.

February - well that turned out different

Well how quick did February go? My February turned out totally differently to what I was expecting. We were all planned and booked to have a nice week in Echuca when Shane took ill and was off to hospital in an ambulance. After three weeks of hospital then rehab, lots of scans and test and also a couple of stressful misdiagnosis and then told they were wrong we are hopefully now off the rollercoaster we have been on. He came home today on crutches and still in a bit of pain, but at least he's home. But my time wasn't all spent visiting hospitals I did get a chance to catch up with some girlfriends,spent time with my daughter and my granddaughters and completed a couple of projects I have had on my to do list for a while.

My oldest grandchild Clare had her first athletics day at school. It was pretty cute watching all the little preppies doing their activities. Some loved it, some didn't care and some were in tears. Clare had fun but wasn't really into being the first over the line.

I had a lovely catchup up with a a couple of past workmates Helen,Kaye and Kaye's daughter Ava for brunch in the city. Then to celebrate a friend, Melissa's birthday a group of us got the train into the city and then a ferry along the Yarra River to Williamstown for the day. The hour long ferry ride was a very enjoyable trip travelling under several high and very low bridges with some amazing views of Melbourne CBD.


What will my birthday month March bring me? I have a few things planned but wherever it takes me I'm ready for the adventure.