I've been a fan of the Vision Board for a number of years and then in
2017 my Vision Board turned into a Vision Wall.
I found the board was getting very crowded and spreading out on to the surrounding wall.
I can also confirm that a few things that I have put on my board/wall have come to fruition.

So far this years Vision Wall has proven to me that I am definitely a visual person. I've also always been a lists person, but I've always written my lists, jobs, goals, dreams in an allocated book, closed the book and sat it on my desk. Only to be actually visible to me when I opened the book. Yes a number of goals/jobs got completed but there was always quite a lot carried onto the next month.

So this month (February) I thought I'd try something different.
As well as having my list in my 2020 ToDo book, I wrote each
February thing on a colourful sticky note and added them to my vision wall.

Now seeing today is the last day of the month I am preparing for March and
I'm happy to say even though there are some things carrying over, there are only three.
I have completed much more than usual.

I'm pretty happy with this effort and I've proved to myself, if I have a deadline I finish projects.

As of today I have finally finished and delivered quilts for my two youngest grandchildren
Louis (2) and Lily (2), no they are not twins, my kids just are very synchronised!!
I have really loved doing these quilts, they are a mix of applique and machine
and I ventured into the Quilt as you Go method and loved it.
This is definitely now my preferred method of quilting.


I also painted them both a couple of watercolours and framed them.
My first pieces of art to be framed and I'm pretty happy.

Very satisfied with this months effort.
#my2020journey
Posted by Davine at 5:43:00 PM No comments:

I'm now back home after having a wonderful time with my three adorable
grandsons O'Shea, Finn and Louis. It's always very sad leaving them.


On the weekend seeing I was catching up with some girlfriends in the city for lunch, I thought I'd get an earlier train and check out NGV Australia (National Gallery of Victoria) at Federation Square. It is also known as the Ian Potter Centre. When I got there the square and surrounds were filled with thousands of people for the Japanese Summer Festival.

The Ian Potter Centre: NGV Australia is an art gallery that houses the Australian part of the National Gallery of Victoria's collection. I've never visited this Australian site
before and was very pleasantly surprised.

There are over 20,000 Australian artworks which include paintings, sculptures, prints, photography, fashion and textiles. This collection is one of the oldest and most famous in the country. Some well known works at the gallery include Frederick McCubbin's, The Pioneer (1904), Tom Robert's, Shearing of the Rams (1890) and many more.
The three panels of  The Pioneer tell a story of a free settler, a farmer who has chosen some land to clear and farm, and his family. The story is ambiguous, like many of McCubbin's other works and McCubbin chose not to respond when controversy broke out over the "correct" meaning.

The left panel shows the settler and his wife settling on their selection of land; in the foreground the woman is deep in thought. In the centre panel, the baby in the woman's arms indicates that some time has elapsed. A cottage, the family home, can be seen in a clearing through the trees. The right panel shows a man crouching over a grave. A city is visible in the background, again indicating that time has passed. It is unclear whose grave it is, and if the man is the pioneer, the baby from the centre panel, or a stranger stumbling across the grave.


There is also some fantastic indigenous art which includes amazing works by
William Barack, Emily Kngwarreye and many other talented artists.


Next time your looking for a little adventure and your anywhere near Melbourne CBD I'd really recommend paying NGV Australia a visit.

Then when I let the NGV, I came across something I've never seen before. It was Niska Robotic Ice-Cream Bar. Yes and ice-cream shop where you are served by a robot, your ice-cream is scooped by a robot and you pick up from a robot. Go figure! I was going to get one but the line was just to long.

Definitely a lazy Sunday today.
First up, after a quick visit to the local little supermarket
I thought I'd go and check out Captain Oldrey Park which is a local
sporting park and sport region for Broulee kids.

The surrounds of the park were devastated on New Years Eve and
it's mind blowing how in five weeks the ground cover of ferns
has regenerated the area.
Nature sure is amazing in what she can do.

My afternoon was spent watching an Avengers movie and then listened and watched the amazing Fire Fight Australia Concert. Wow so many fantastic artists. Some of my favourites would be Daryl Braithwaite, Jessica Mauboy, Guy Sebastian, Deltra Goodrem, Ronan Keating, Tina Arena, Hilltop Hoods and Alice Cooper. Both my grandsons O'Shea and Finn liked Alice Coopers band. While Alice Cooper was singing I asked O'Shea if he liked guitar or drums and his answer "I like the Old Guy". How amazing were Queen and k.d Lang singing hallelujah bought tears to my eyes. Then of course there was John Farnham and Olivia Newton-John.
OMG OMG what an amazing finish to an amazing concert.
Oh my what a magnificent concert. 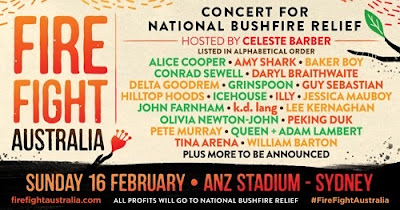 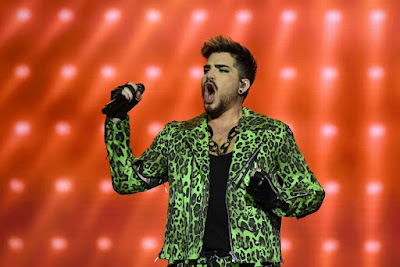 Day 4 was a bit more eventful after my restful day yesterday.
First up I woke up with a little car park in my bed with me.

The morning was spent sitting outside, enjoying the sunshine.

Then after lunch O'Shea, Finn and I took ourselves off to the movies to see "Sonic  The Hedgehog".
It is totally a kids movie but was still fun to watch and so great to spend time
with these two amazing boys. The popcorn and ice creams were fun too.

Then tonight it was out for a family night out. Dinner was at a great Indian restaurant called Kholis Indian Restaurant. The whole meal was super yummy, but I am SO full now.

After dinner on the way home we went for a drive through the
Mogo State Forest which was totally destroyed by the recent bushfires.
So many houses burnt down, so many trees blackened, so many animals lost.
Such a sad sad sight.

It's been a pretty quiet day today. Usually the day after I do the big drive
whether it's coming up here or going home I'm pretty tired.
With everyone of at work, school or childcare it was just me and
Bosco to hang out at home.


I had a little bit of  new house stuff to do on my laptop, then after a healthy lunch out on the new patio in the nice sunshine I could feel my eyes telling me it was time for a Nana nap. My eyes were definitely not getting an argument from me.

Seeing it's Valentines Day Shane and Stacey went out for dinner and this kids and I hung out together. Louis enjoyed playing with his cars and the two bigger boys O'Shea and Finn claimed my bed to watch Star Wars on the iPad.