Well I'm now home after a wonderful week in Batemans Bay visiting my son Shane, his wife Stacey and my two adorable grandsons O'Shea (4 yrs) and Finn (20 mths). My little holiday consisted of looking after the boys for a couple of days while Mum and Dad went skiing.


We had a day at Mogo Zoo which is a privately owned zoo in the historic mining village of Mogo. Mogo Zoo has had success in breeding programs for endangered species such as Snow Leopards, cotton-top Tamarin, Red Panda and the Sumartran Tiger. It is also one of two zoos in Australia that exhibit White Lions. One of the most popular animals at the zoo would have to be the pair of male southern white Rhinos. Weighing up to 4000kg and standing up to 1.8 metres tall, the zoos two newest and largest residents are brothers "Kei" and "Jabari". The two brothers now have to be house separately as they are both coming into the breeding age and may fight for their ground if housed together. We were lucky enough to be there at the right time to see Jabiri have a feed.

We also had a couple of days where we did a bit of fishing. No luck with the fish but it was still a bit of fun.

Day Two of our road trip went well and the further north we got to clearer the skies got. With each kilometre I got a little bit more excited about seeing my two little grandson O'Shea (4) and Finn (1) as I hadn't seen them for quite a while. As soon as O'Shea saw me he ran to me and gave me a huge hug. Finn wasn't to sure at first but it only took about half an hour and he was hugging me as well. Today their Mummy and Daddy (my son Shane and his wife Stacey) headed off to Perisher for a few days skiing. It's the first time they have had a few days away without the boys and I get to indulge in their little personalities. Considering they are not used to being away from their parents they weren't fazed at all when Shane and Stacey headed off. I am so lucky to have the most adorable four grandchildren in my life. Oh I almost forgot I'm also babysitting Bosco the dog as well. 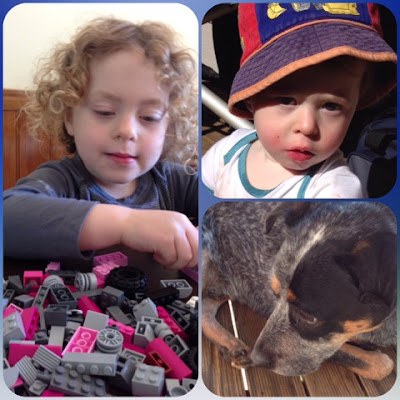 This morning we headed off early on our first part of our road trip to Batemans Bay. Why are we going  to Bateman's Bay, well my son and his family live there and we're going up to look after my two little grandsons O'Shea and Finn, while Mummy and Daddy go off skiing. From home Batemans Bay it's just over 759 kilometres and would take about 9 hours to drive so we usually do the drive over two days. We did have full intentions of heading off very early but as usual we got held up and didn't end up leaving until about 9.00am. How come even though we are only going for a week the back of the car looks as though we are heading of on another major trip!!!

The trip went along without any hitches although it has rained almost all the way. At one of our toilet stops I did have the feeling that I was being watched by the locals!
Tonight's we are staying in the seaside township of Lakes Entrance. As the names suggests, Lakes Entrance is the entry point from the ocean to the Gippsland Lakes. The Gippsland Lakes are Australia's largest and most beautiful inland waterways. They consist of a network of lakes, marshes and lagoons, covering 600 square kilometres. We are now settled in for the night, there won't be much social activities (or swimming) while we are here as it is just way to old and wet!!!

Wow how did we get to August already? I know we all say time flies - but hey it really does. My past few months have been very busy helping my daughter Rachel get organised for her wedding to Luke, which took place on July 25th. As a Mother of the bride I couldn't have been more proud of my girl. Her two daughters Clare and Mikayla (my beautiful granddaughters) were the adorable little flower girls. After the busyness of the wedding I looked after these two little amazing girls for the week which kept me on my toes. So this week has been a lot quieter than my past few months, so it's now time to do a blog update!!!