Today we ventured on a mini adventure north of Carnarvon to Quobba Point to check out the blowholes and the amazing Indian Ocean coast. The rugged coast just north of Quobba Point has produced a spectacular set of blowholes where the action of the waves produce a water spout some 30 metres or more high.

After taking a gazillion photos of the water shooting into the air, while making sure I kept my camera dry we headed down along the road a bit and came to a little shack village at the Blowholes campsite. I would say these very basic shacks are where the locals come on their holidays, but today it looked like a ghost town. 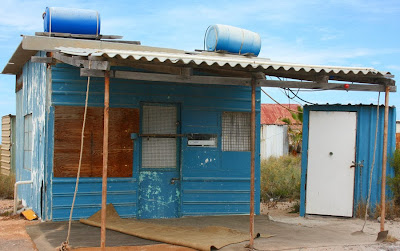 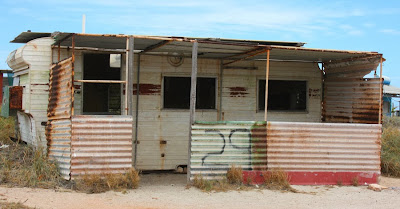 Then we headed north to Quobba Station. It is a working pastoral station with some 80 kms of coastline and runs about 10000 damaras, which are a South African breed of sheep. The coastline along this west coast was nothing short of spectacular. It is one of the only places in Australia where you can do deep sea fishing from the coastline. Although it's on an extremely rugged cliff top and in my opinion a bit dangerous!! I did take myself on a little walk over the rocks to a tiny little beach. To my enjoyment it was covered on lots of shells and heaps of coral. I just couldn't resist and pick up some, but I did limit myself to two.
Posted by Davine at 9:28:00 PM