A Day in Carnarvon

Carnarvon is known for its Banana Plantations, Tropical Fruits, Fine Seafood and Warm Climate. It is situated in the Gascoyne Region and lies at the mouth of the Gascoyne River on the Indian Ocean. So today we headed out to check out some of what Carnarvon has to offer. First point of call was the Carnarvon Space and Technology Museum. The museum has two parts - the Carnarvon Tracking Station and the OTC Satellite Earth Station, each station playing separate roles in the early space industry. The Carnarvon Tracking Station was built to support NASA's Gemini, Apollo and Skylab programs. It was commissioned in 1964 and operated for 11 years. It was the last station to communicate with the space capsule leaving the earths orbit, and the last to make contact before splashdown in the Pacific Ocean.
The OTC Satellite Earth Station was opened in 1966. On 21 July 1969, the day Apollo 11 moon landing, the Casshorn Antenna relayed Neil Armstrong's first steps on the moon from NASA's Honey Suckle Creek Tracking Station to Perth TV audience - the first live telecast into Western Australia. ﻿﻿﻿﻿﻿

﻿﻿
Next we headed off to check out some of the produce farm shops. After filling up our bags with fresh bananas, corn, cucumber, tomatoes, eggs and enjoying a passionfruit ice-cream we sat down at River Gum Cafe to share a Ham Cheese Toastie and scone, jam and cream. All in all it was a pretty yummy day. 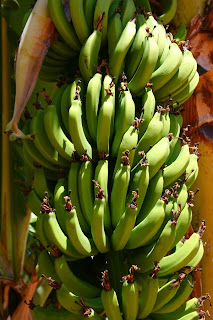