Once again we were heading for a location that someone way back in our adventure had recommended. We arrived at Indee Station around 11.00am and once again spent our first day relaxing. Indee Station is a cattle station about 400,000 acres in size and runs about 3,000 head of cattle. We booked in for two nights and at first it looked as though our time would be pretty quite as there didn't seem much to do. The first night we headed over to the homestead for happy hour with the owner Colin and his wife Betty. What characters they were, I could have sat and listened to Colin all night. Between telling us about all the snakes we should look out for (eeeewwwww!) he also said we had to go and check out Red Rock and the monument for the air crash. So the following day we donned our enclosed footwear (just in case of snakes) and headed off deeper into the property to check out the sights.
This part of the country is prone to cyclones during the dry season (approx. November to March). One such cyclone hit Indee Station and totally demolished one of the houses.
The monument for the air crash had been moved to a different location when mining was started where the plane went down. It was New Years Eve in 1968 when the Vickers Viscount aircraft, McRobertson Miller Airlines Flight 1750 plane's wing fell off causing it to crash, killing all 26 people on board. Laying at the base of the monument are small pieces of the aircraft left behind. For some reason the monument only had the crews names on it.
Red Rock is sort of like a mini Uluru. Betty had given us a mud map to follow and Colin said we must go and check out the Aboriginal Carvings. So off we headed with our little mud map, past two rock pools that still had a bit of water in them, then around the back of the rock to a little sign that said RR and an arrow pointing upwards. Shane stayed at the bottom (can't climb since his hip operation) and I set off climbing to the top. About 3/4's the way up I finally came to the carvings. Now some of you may think I am a bit crazy as Shane did but what happened next really did happen. As I stood there taking a photo I heard a mans voice behind me, I thought there must be someone else up there checking the carvings out. But no there was no one in sight, I couldn't even see Shane down at the bottom. When I finally climbed down the rock I asked Shane if he had yelled to me and he said no! So I put it down to the wind or something. 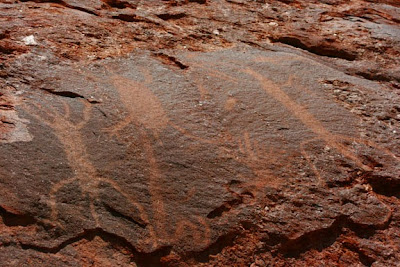 As we headed back to the car I stopped at the two rock pools to take some more photos. Once again Shane kept walking to the car. I was crouching down at the largest of the two pools taking a photo when I heard a young Aboriginal girls voice speak. Again I thought someone must be there and looked around expecting a girl to be there but once again nobody was there. When I told Shane he just shook his head and said it must have been the wind, but I KNOW I heard the voices. That night back at happy hour with Colin and Betty I asked if anyone had ever mentioned anything strange happening out at Red Rock and I explained what had happened to me. They had never heard of anything like this happening before but I could tell by the look on Colin's face he didn't think it was the wind.