Before continuing on with my journey I have to thank everyone out there for checking out my blog, as this week I hit 44,000 page views. When I started this journey back in February 2009,  I never dreamed I would have that many page views. I was just writing it for someone to talk to. To celebrate this milestone I would like to give someone a gift. Anyone who leaves a comment on my blog between now and the end of October will go into the draw to receive one of my chainmaille bracelets - your choice. 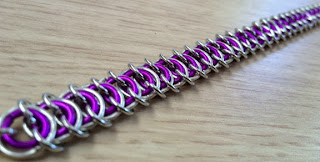 We are now in Point Samson which is like the jewel in the industrial areas of Roebourne, Karratha and Dampier. We are staying at Point Samson Caravan Park which is quite nice, small, good amenities and right opposite a beautiful beach. We have had a couple of days sightseeing and I must say I find these mining towns very interesting.

Roebourne is the oldest settlement in the west being proclaimed in 1866. Roebourne seems to me like a town that has fallen in the shadow of Karratha, but they do have some impressive old buildings. One perfect example of this is the Old Goal (Visitors Centre). I know the inmates were criminals but it is really sad as to how they were treated, especially the Aborigines. One of the distressing pieces of evidence of the treatment of Aboriginal prisoners can be seen by the iron bolts and rings on the interior walls where the native prisoners were shackled during the night. They also had to wear neck chains for the whole length of their sentence. This was not a legal requirement, they just thought it was the best way to control the Aborigine prisoners. Neck chains were never used on white prisoners. So sad...

Cossack was originally known as Tien Tsin, and was established in 1863 as the first port for the pastoral and pearling industries. Due to over fishing the pearling industry had to be moved to Broome. Today Cossack is a ghost town, but thankfully many of the towns historic buildings have been restored.

Wickham was only established in 1970 with the sole purpose of processing and shipping Iron Ore from Pannawonica and Tom Price. To accommodate the huge ships and high tides the Cape Lambert Jetty is 2.7km long and has a height clearance of 17.8 metres. All mining in this area is owned by Rio Tinto. Even though this is a very industrious settlement we were able to find a couple of nice little beaches.
Karratha is an aboriginal word meaning - good country and for the mining industry that certainly the case. Karratha is one of the fastest growing towns in Australia, being developed back in 1968 to accommodate the Hammersley Iron operations and the Dampier Salt project. Today it has been developed into the largest and most economically diverse community in the Pilbura and is home to an estimated 24,000 people. With all the works going on all over this town I personally thought it was a mad house.
Dampier overlooks the ocean and the islands of the Dampier Archipelago. Dampier now houses the port facilities for Dampier Salt, Pilbara Iron and Woodside Energy. We went out and did a virtual tour at Woodside Energy and learnt all about the processing of natural gas for the North West Gas Shelf Project. This is a huge and totally amazing project bringing natural gas inland, processing it and then distributing it to accommodate over 40% of Australia's Gas and Oil, all of Perth's natural gas and also sent overseas.

But even though this was all very interesting, the main reason I wanted to visit Dampier was to see the Bronze statue of Red Dog. One of the best known and loved travellers in the North West Red Dog has been the subject of numerous books, songs and more recently a movie. Red Dog died back in 1979 and his statue was erected not long after that. Many locals still recall his visits and laugh at the memories of his strange and wonderful ways. If you haven't yet seen the movie Red Dog I thoroughly recommend it, just have a tissue.