I'll be first to admit I am a little addicted to my technology. I love my iPad, iPod, iPhone and my laptop. I check out Facebook and my emails numerous time during the day. I have thought several times it might a good idea to see if I can have some time away from technology, but never got around to do it. That's until the past few days, we have been staying where there was no internet connection and where we were staying had no electricity. So I had my phone off to conserve the batteries. So now I'm doing a bit of catch up on my Aussie Adventure updates.

Charleville
One of the attraction we wanted to see in Charleville was the Cosmos Centre. We have been here before - around seven years ago - and enjoyed it so much we just knew we wanted to visit again. They have four extremely powerful telescopes that we are able to look through into the world above. We were lucky enough to see the moon so close that we cold see all the craters. It was absolutely magnificent. we also saw the double star - Albireo, the group of stars called M6 which is 20 light years away, the second largest globular cluster called Tucana 47 and another highlight was seeing Saturn so close you could see it's rings and some of it's 60 moons.
From Charleville we headed for Blackall where we stayed a night in a free camp on the Barcoo River, which was more a creek than a river.

Blackall is another tiny town just hanging on, but it has several intestine pieces of art throughout the town.

The Eagle and Nest: Richard Moffat made this Wedge Tail Eagle and it's nest from of old rusty railway dog spikes, timber, bolts and various other waste pieces of scrap metal. The artists says "The nest is a home and a place to raise a family, which is another representation of what Balckall feels like to me". We set up our camp just beside our Eagle, so it was like he was looking over us. 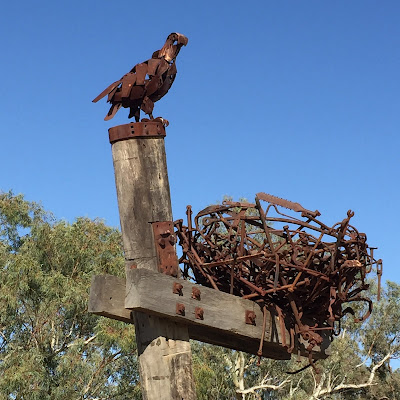 Lifespan: Frederick White made Lifespan predominately from recycled bore casing. This piece of artwork represents life in general; paths that sometimes converge or momentarily cross over, then towards the end of life, like the beginning, level out to a new time for experiencing. 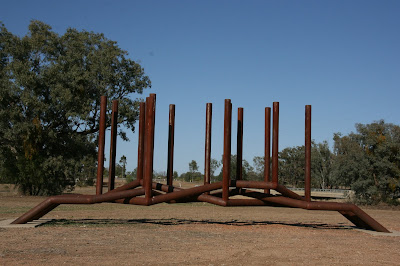 RolyPoly: The RolyPoly is another form of creativity by the artist Richard Moffat. His concept about this was all about having fun. I think he got the feel when he created this art mainly from old fencing wire. 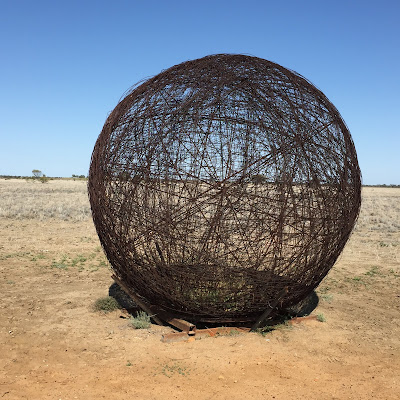 Jack Howe: Jack Howe became famous in 1892, for shearing 321 sheep with hand blade shears in 7 hours and 40 minutes at Alice Downs Station. A record that has never been broken. 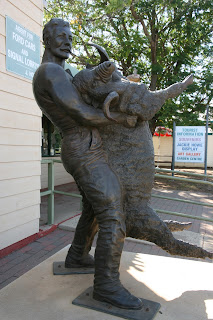 One very historic attraction in Blackall is the "Blackall Woolscour" was recommended to us to visit. The Blackall Woolscour is a historic wool washing plant which operated on steam from 1908 to 1978. It is believed to be the only complete operation of its kind left in Australia, with the original steam machinery still in place. It was well worth staying in Blackall to see this amazing building and machinery. 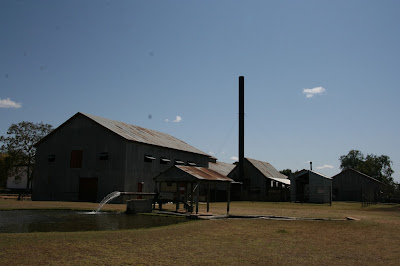 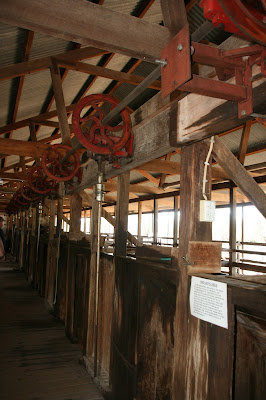