It's been 16 years since I was last in Sydney, I was lucky enough to have come and worked here for a week while the 2000 Olympics were on. But this time in Sydney was a quick three day visit, one day to look around Sydney, one day up the Blue Mountains and one day catching up with some relatives. We decided to stay about and hour out of the city - Sydney is way too busy to tow a van through, plus Richmond is at the base of the Blue Mountains. I had been recommended the Richmond Club camping area so that's where we headed. It was a great location but oh my goodness we were camped literally in the carpark. It really didn't matter though as we fully intended to be out every day, which we were. So our first day started around 10.00am as we jumped on the train and headed into the city. I just might add that our day didn't finish until 1.30am - goodness we were tired. We had a look around the city a bit, had some lunch and then headed over to Darling Harbour.
Shane's not one for heights but I got him up in the "Star", the ferris wheel at Darling Harbour.

Next we decided to get a ferry out to Manly. Heading out in the bay we were surrounded by hundreds of sailing boats tacking every which way to miss each other and also miss the many ferries travelling the waters. 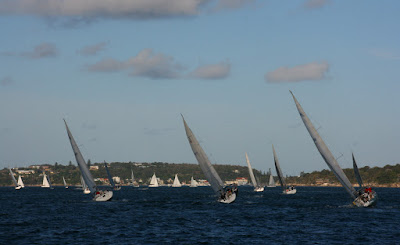 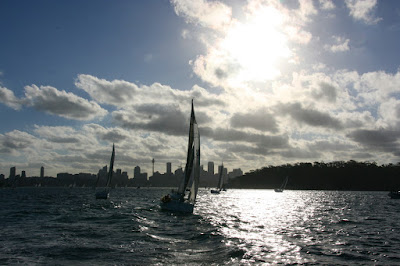 Shane wanted to go to the Manly Leagues club as he had been there 36 years ago on a football trip. I really wished we hadn't gone as it certainly wasn't the highlight of our daytrip. But the ferry trip back to Sydney certainly made up for it. Coming back to Circular Quay you pass the Sydney Opera House and have a fantastic view of The Sydney Harbour Bridge. As I was standing on the deck of the ferry taking my photos all of a sudden we were treated to fireworks going off at the side of the bridge. Then as we passed the Opera House we could hear the band Crowded House performing one of their four reunion concerts. What a way to end a fantastic day.

Then it was back on the train for our hour and a half journey home.
Have I said I don't mind train travel so it was a pleasant ride home too.
Posted by Davine at 7:48:00 AM