Once again we didn't have a very big drive to get to Red Rock this morning! We drove a whole 76km and it took us just under an hour. As the crow flies it is only 12km from Wooli - but we aren't crows!!! Red Rock is once again a small seaside hamlet on the banks of the Corindi River with a population of around 270 people. Once again the caravan park we are staying at has the river on one side and the ocean on the other. This location had also been recommended to us by several other travellers and once again I am glad we have taken their advice. There are quite a few houses in the town but most are empty for most of the year and then full at Christmas, New Year and Easter. 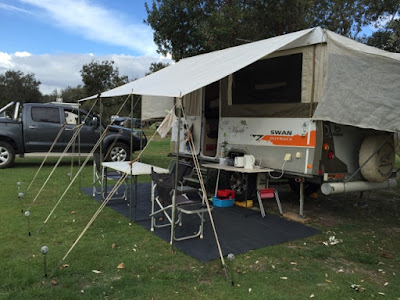 We will give the fishing a bit of a go in the morning, weather permitting. Hopefully we have better luck than we did at Wooli. Shane got a couple of fish but they were undersized.

Unfortunately this area has a sad history. The headland is reputedly the sight of a massacre of Gumbaynngir indigenous people in the 19th century. A memorial has been erected at the base of the headline to commemorate this. Aboriginal woman tend to avoid the area. The massacre is reputed to have started at Blackaders Creek when mounted police entered the camp. They started shooting and then pursued the survivors to the Corindi River where they continued shooting. Legend has it, some people were then driven off the headland. 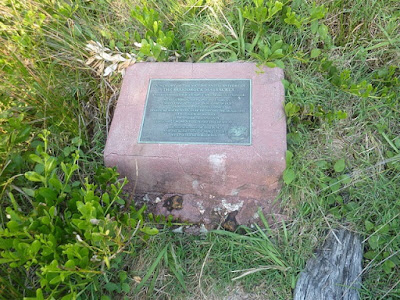 The headland may have been named Red Rock because the river went red from the blood of the indigenous people or the name may have been from the unique red rock formation. 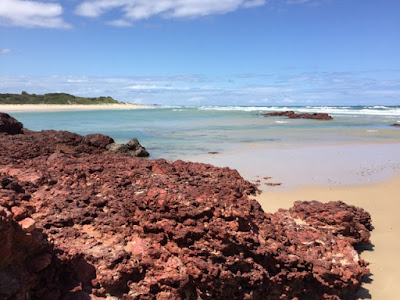 Tonight after yet another pretty heavy shower we were treated to an amazing rainbow. 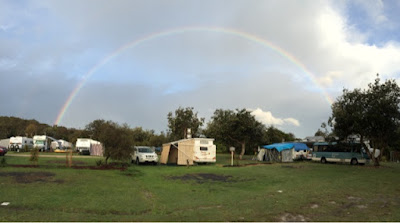