This morning we were up bright and early once again. It wasn't really our choice, there was a coach tour camped in the paddock near us and they were all up at 5.00am for breakfast before they headed off. Now don't get me wrong I think if you have a laugh first thing in the morning is good medicine - but couldn't they have laughed a little quieter or waited till 6.00am Anyway it got us up early enough to head out and go for a 8.00am cruise up Geikie Gorge. As most people I thought Giekie was an Aboriginal word but it isn't. The gorge was named after Sir Archibald Giekie, who has never even been to Australian. So the process has started to have the gorge changed to it's Aboriginal name Darngku Gorge, but as with most governmental things it may take a while. I wouldn't say it was the best gorge I have been to but it was a lovely morning for a cruise along the Fitzroy River. Our guide was very informative and gave us lots of information to process.  Darngku (Geikie Gorge) is part of an ancient barrier reef that developed during the Devonian Period, around 360 million years ago. It is amazing seeing the level the river has reached in past floods. The thing that really grabbed my attention and imagination was the different shapes that had been worn into the rock from massive amount of water being swirled around. 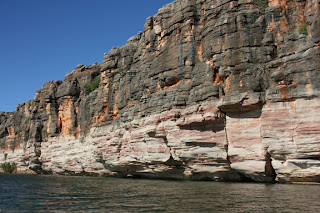 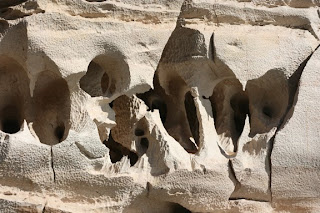 The Fitzroy River is also home to many many freshwater crocodiles and lots of different types of birds and fish.


The rest of our day was spent longing around,
talking to our neighbours and preparing to head of to Derby tomorrow morning.
Posted by Davine at 6:50:00 PM