After a great nights sleep listening to the rain fall onto the top of the van it was then followed by a nice relaxed drive of  257 kms to get to Coober Pedy. Once again there weren't many sights along the way. If anything the countryside was even more barren. I took this first shot at one of the rest stops. Overlooking Ingomar Station the land is so flat you can actually see the curve of the earth. I have actually never had this happen in any photo I've taken. 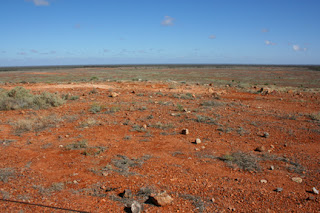 Before we knew it we were heading off the Stuart Highway and into Coober Pedy. With a population of around 3500, the town is sometimes referred to as the "opal capital of the world" because of the quantity of precious opals that are mined there. Coober Pedy is renowned for its below-ground residences, called "dugouts", which are built due to the scorching daytime heat. The name 'Coober Pedy' comes from the local Aboriginal term kupa-piti, which means 'white man's hole'.
Opal was found in Coober Pedy on 1 February 1915, since then the town has been supplying most of the world's gem-quality opal. Coober Pedy has over 70 opal fields and is the largest opal mining area in the world.

This piece of machinery is an example of some of their opal mining machinery. One part of it goes deep into the earth and sucks up gravel from under ground. It is then drawn to the surface and spat out of the bucket. Then the miners hope and pray they have found some precious stones. 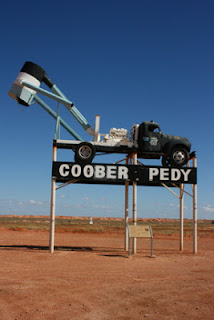 If anyone is interested in having my Aussie Adventure posts delivered directly to your inbox. Please just add your email address and it will be sent direct to you.