Our “Saturday Girls Pizza Pyjama Night” turned out to be a huge success, but first I have to share my preparation saga with you. I thought I would share a special desert that I had seen prepared on the “Food Channel”. The process was to melt some dark chocolate and make a chocolate cup by dipping a small balloon into the chocolate and after it sets filling it with ice cream, fresh fruit and cream. I made the first cup and it turned out beautifully, so it was onto the second. I got the second one made and it was sitting on the bench waiting to set, when all of a sudden the balloon burst and I had dark chocolate from one end of the kitchen to the other. So I thought I would make the next one and get it straight into the fridge to set it quick. So the balloon was dipped and in the fridge. After a couple of minutes I checked in the fridge and to my shock the bloody balloon had burst in my fridge. So not only did I have dark chocolate all over the kitchen but all over the inside of the fridge. All I could do was lean back on the bench and laugh uncontrollably. So after trying to clean up as much dark chocolate as I could – it is not as easy to clean up as you think – I moved onto plan two. I decided to forgo the balloons and just make chocolate cup by coating cup cake papers. So in the end the desert turned out really yummy. 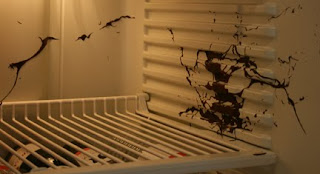 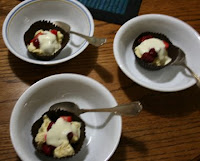 Choc Cups
Our pizzas were yummy as well, with one being seafood, one being a meat lovers, a garlic pizza and one having everything from ham to avocado to spinach. I must say that they were as good as I have had at any pizza restaurant. 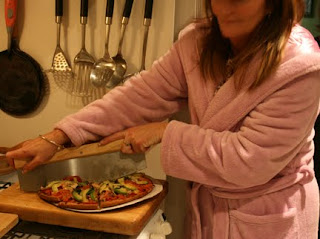 Yummy Pizza
After dinner one of the girls – Robyn – gave us all a little lesson on making an accordion card which was a lovely way to finish the night of. 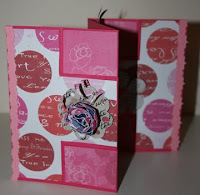 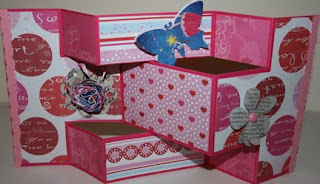 Pretty Card
We did have some games to play, but decided to leave them until our next fun night together as it was then 1.30am and we were all getting a bit drowsy.

After my late night last night I have had a pretty lazy day today – although I did get all of my ironing finished. This afternoon I watched the DVD “Abraham – The Secret behind the Secret” with Jerry & Ester Hicks". It is a really thought provoking and enjoyable movie. What a lovely way to spend a rainy Sunday afternoon.
Posted by Davine at 6:36:00 PM