OK from now on if anyone tells me I am addicted to my laptop or mobile phone I will never disagree with them ever again. I have just had a couple of days with no mobile phone reception or internet coverage and even though I have lots of fun stuff to do I have felt like I have been on some remote island and no-one in the world can get hold of me. But ahhh I now have both and I now feel like I am back in the world. So yes I am addicted to technology and proud of it. After all I am now 57 and I can do whatever I like!!!! I have so many photos I want to show you all, I think I might just tack them onto the end of my posts for a while.


On Wednesday I visited the most amazing tourist attraction I have ever been to. It has also been voted the #1 attraction in Queensland. I visited a place called “Paronella Park”, and I encourage everyone, if you can’t get there have a look at the link I have attached to learn some of its amazing history.

This incredible 13 acres of history in Mena Creek’s story starts way back in 1928 when Jose Paronella from Catalonia purchased the property and proceeded to create him and his wife Margarita’s home, a castle with an amazing grand staircase of 47 steps (this was built 1st to transport building supplies - imagine carrying steel, cement etc. up and down hundreds of times a day!!, tennis courts, an ice-cream parlour, a ballroom where they also showed movies, fountains run only on the pressure from his waterfall, many walks including “Lovers Lane”, a tunnel – that today contains a group of the tiniest cutest “micro bats”. His property was not connected to electricity grid – I don’t think Mena Creek would have even had electricity. So he built his own Hydro-Electricity system which has just been hooked up again and is now powering the property. Everything was built by Jose and in the render on the buildings you can see all of his finger marks where he pressed the cement onto the steel. The property has had plenty of tragedies such as floods and in 2006 Cyclone Larry threw all its force at Jose’s dream. But even though Paronella Park is mostly just a shell of it’s heyday it is amazing. I did a day and a night tour and I am still amazed by the enormity of what this lone Catalonian created. 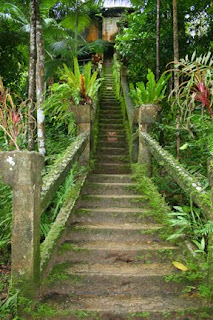 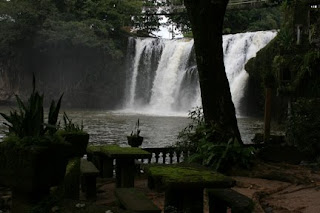 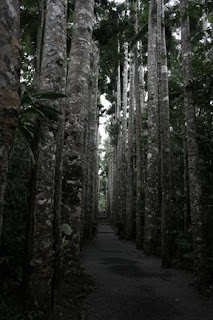 Beautiful Walk
"Davine Time" update: At the moment my days are just filled with Davine Time,
but today I went and had a Tarot Card reading - Mmmm very interesting.
Posted by Davine at 3:35:00 PM