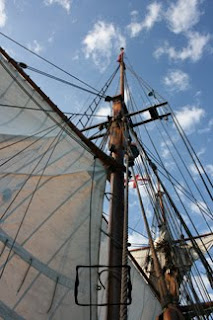 Well Linda and Joanna you are both on the right track. It is the rigging on the sail on the “Enterprize”. Yesterday was such a lovely sunny day Shane and I decided to go for a drive down the beach. We had such a lovely time just walking along the beach, having a great “fish n chip” lunch and just being together. We got back to Rye and decided to go for a walk along the pier. At the end of the pier sat this beautiful Tall Ship “Enterprize” They were just about to leave for a one hour bay cruise so we jumped at the chance to go along. “Enterprize” was built so that a significant part of Melbourne’s history would be preserved and accessible to the people of Victoria. She is a replica of the ship that bought the first settlers to Melbourne in 1835. Enterprize Ship Trust is a non-profit organisation, with a Board of Trustees and a Volunteer Steering Committee. There are also numerous dedicated volunteers, without whom the ship would never have been built nor would it continue to operate. Oh what a wonderful hour it was too. I learnt so much in the hour. One amazing fact I found out was that for any of Melbourne homeless that pass away and do not have any family, they are cremated and given a service and burial at sea. I have often wondered what happens to someone who lives on the streets and has no-one in the world and no money. I think it such a wonderful thing that can be given to them at their time of passing.