At last I have reached a location where I have either electricity or enough Internet coverage to update my blog. After we left Croydon we headed west for the fishing village of Karumba. Karumba is locally known as the Barramundi and Prawn capital of Australia. Now anyone who knows me knows how much I love seafood. We went fishing a couple of times and caught a couple of Spotted Grunters which were very tasty. Then just to make sure we had enough seafood we went to a seafood buffet at the Karumba Sunset Tavern - oh my goodness it was amazing. 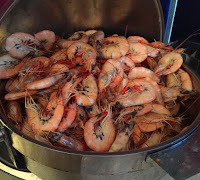 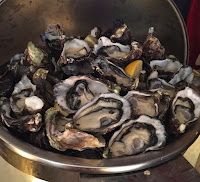 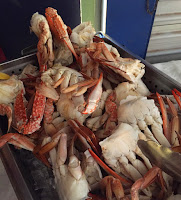 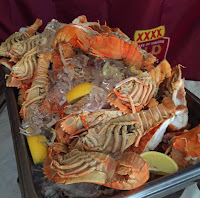 There was one down side at this location, I killed a kangaroo. The poor thing just jumped straight out into the car and I didn't he it until it was too late. I felt very sad. A couple of interesting Karumba facts are that it was a base for the famous Empire Flying Boats on their trek from Australia and England. Also the skies in this area are always filled Whistling Kites and the magnificent Wedge Tailed Eagle, which are the largest in the world with a wingspan of 2.5 metres.
There isn't really a lot to do in Karumba but the caravan park we stayed at - Karumba Point Tourist Park provided lots of entertainment for the parks guests. Saturday nights they even put on fried fresh fish for everyone.All we had to bring along was our chair and some salad on our plate. I would say there would have easily been 100 people eating. Leaving Karumba we headed south, our first stop was in Normanton. There was a tiny bit more history in Normanton but that's about all.
Our stop for the night was at Burke and Wills Roadhouse. Unfortunately on our days drive we had another rock hit the windscreen. So now we had a star chunk and a long crack in the windscreen.
Burke and Wills roadhouse was pretty basic, but it was only for the night.
We decided to spend the next couple of nights camped on the banks of the Gregory River. The township of Gregory was really only a pub and the smallest general store I have ever seen. Even though we had no electricity, now water and really nothing to do. But I just loved this location being able to sit by a fire each night and falling asleep listening to the water flowing. 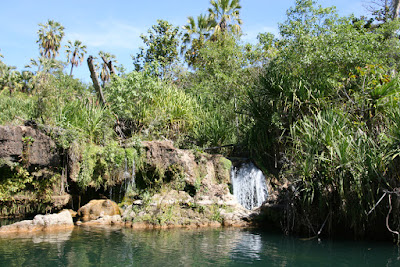