After a nice night at the Darwin Sailing Club last night (although the meal was pretty ordinary) I decided to stay in the city at the hotel where Shane is staying. Update: Shane is staying in the city for a week on his boys week away, as per the past 7 years. After a late night swim I had a very comfy nights sleep (air conditioning)! This morning I was up bright and early and after breakie and two more swims I headed of the check out some things in Darwin. I am now sitting back at our little camper Myrtle for my first night ever staying here alone. Where we are staying is quite close to the Darwin airport and Darwin RAAF base (Royal Australian Airforce) although the sound of the planes is not a bother at all. Royal Australian Air Force's Base Darwin is one of Australia's main forward operating bases. Located slightly north-east of Darwin, the runway is shared with Darwin International Airport. Today while driving home three RAAF fighter jets of some sort were doing manoeuvres above me, and quite low I must say. So low in fact I could see quite a bit of detail on the planes.

Here's a little bit of Darwins military history thanks to Travel Australia on www.news.com.au
For anyone keen to experience a bit of Australia's military history - to put a poppy on a headstone in a military cemetery, or stand on the spot where a trooper won a medal for bravery - don't need to book a trip to a far-away land with a significant battlefield located right here on home soil.
Australia's Top End was the frontline during the darkest days of World War Two, when Japanese forces occupied so much territory to our north and focused on Australia in an effort to keep our troops occupied at home. Travellers can take a step back in time to the years when air-raid sirens regularly rang out over Darwin.
The Northern Territory capital was a staging post for units bound for the European and Pacific theatres, with every branch of our military building bases in and around Darwin, and the men and women in uniform lived beside those civilians that called the remote settlement home.
Warships of all shapes and sizes dropped anchor in Darwin Harbour, air force fighters and bombers used runways cut into the scrub beside the Stuart Highway ( we actually saw quite a few of them on our drive up), big guns occupied concrete bunkers along the coastline, and clusters of barracks accommodated troops posted to the Top End.
Darwin became a battlefield on January 19, 1942, when 240 Japanese aircraft arrived on a sweltering summer morning to bomb the settlement in what was the first of many aerial attacks that happened right across northern Australia during the next two years.
At least 243 people died that day - including postmaster Hurtle Bald, his wife Alice, their 20-year-old daughter Iris, and most of the post office staff - and Darwin was all-but abandoned with anxious civilians going south and many military units retreating down the Stuart Highway to Adelaide River.
"This is the only place in Australia where you can easily stand on a battlefield," Darwin Military Museum director Tom Lewis explained.
"The Japanese attacked Darwin because it didn't want Australia harassing the Empire - Japan wanted to push us out of the war, hoping that if we were defending we couldn't go on the attack - so the harassment raids were scheduled to tie up men and materiel.
"Darwin was at war for two years, there were 64 raids on the Top End during that time claiming lots of lives, and every Australian should be proud of the men and women in Darwin during that time because they fought hard to defend the place."

It's something about Australia's history that I never knew very much about. OK this is weird - As I sit here outside the van in the dark typing my blog the three fighter jets that I saw today just flew over my head again - it's a pretty eerie sound when it's dark!
I have only taken one photo today and that was my lone dinner tonight so I will just share that one with you. 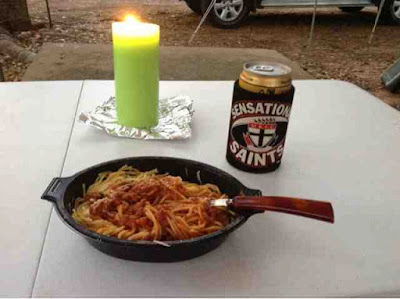 Spaghetti Bolognese, nice cold beer and a citronella candle to try and keep the mozzies away!!
Posted by Davine at 6:08:00 PM