Townsville is a city located on the north eastern coast of Queensland and with a population of  around 179,000 it is the biggest coastal city we have been in quite a while. It is a bit weird being back in a city as big as Townsville there are a lot of differences to being in the smaller locations in the outback. Other than the obvious differences, more cars, more houses and more people. It sort of hits you as to how everyone is in a hurry and on a bit of a mission. Now don't get me wrong I'm born and bred a big city girl and I don't see anything wrong with that, it's just different. One  thing that is different that I don't really like and I know I am guilty of it, is people seem to be not as friendly. I don't think it's that they aren't as friendly, there are just so many people they forget about the smiles, the hello's to passing fellow humans.

Just off Townsville's coastline is the world known Great Barrier Reef, which is a great place to head out and snorkel or scuba dive. We didn't go out but I have snorkeled there in the past and it is beautiful. Also standing on the strand you look out to the magnificent Magnetic Island.
Standing in the middle of the city is a huge giant pink granite monolith (it's just a bit to short to be called a mountain) called Castle Hill. It's obviously a great place for visitors to view just how big and pretty the Townsville area is. It is also a very popular place for locals to walk or run up. There were so many taking on Castle Hill, in fact I read that over 2,000 locals frequent this big hill every day. It would literally kill me. The 360 degree views are pretty amazing though. 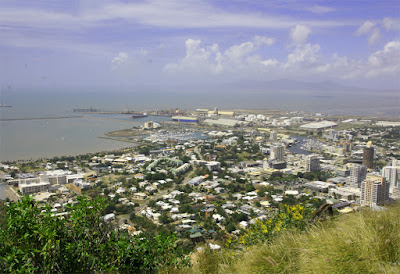 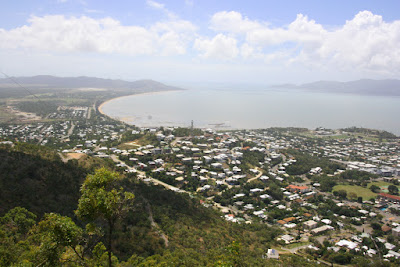 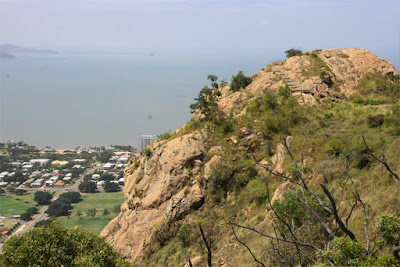 As well as providing all of us with some amazing views, Castle Hill has a significant WW11 history with a WW11 observation bunker sitting on one corner of the hill. The hills vantage point was used by visiting American soldiers during WW11. According to local legend, the American soldiers offered to demolish Castle Hill and use the rock to build a bridge to Magnetic Island. I really glad the city take them up on their offer.